‘Good Way to Recognize His Contributions to the City’ in Fairfax 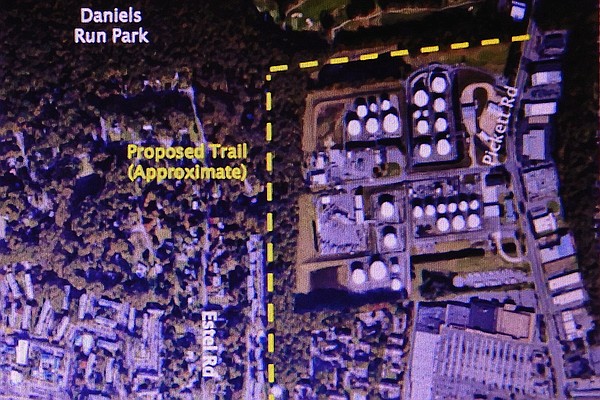 A future trail to be built in the City of Fairfax was originally expected to be called the Comstock Trail. But after a recent action by the Fairfax City Council, this trail will instead be named after former City Mayor, John Mason.

During the Council’s March 9 meeting, Parks and Recreation Director Cathy Salgado read the staff report explaining the reasons for the proposed change. She noted that Mason served as Fairfax’s mayor from 1990-2002 and was the first, four-term mayor in the City’s history.

“Under his proactive leadership, numerous initiatives were undertaken, including economic development, upgrading housing, improving community appearance, encouraging the arts, and advancing regional cooperation – especially in the area of transportation,” she said.

“Mason has a strong interest in and love for the City, and especially its trail system,” continued Salgado. “He has been a champion of expanding the City’s trails and has been an advocate for providing funding for both building and maintaining trails.”

Fairfax’s Parks and Recreation Advisory Board (PRAB) provides recommendations on the naming of the City’s parks and trails. And at its Feb. 11 meeting, it voted to endorse the recommendation to change the Comstock Trail’s name to the John Mason Trail. It then forwarded this request to Fairfax Mayor David Meyer and the City Council for their consideration.

THE OFFICIAL RESOLUTION presented to them stressed that Mason has been a Fairfax resident since 1975 and was instrumental in creating the 2020 Commission, which focused on long-term future needs of the City. It also stated that he “provided strong leadership in developing initiatives to strengthen the City’s economy.”

Furthermore, noted the resolution, Mason “advocated for the purchase and development of open space throughout the City and actively sought the creation of a City trail network. Mason took an active interest in developing regional cooperation and joint planning and continues to be a strong supporter of investing in new trails and maintaining existing trails.”

After hearing the resolution, Councilmember Jon Stehle said he was pleased with “such a great motion put forward by PRAB.”

Councilmember Tom Ross then thanked Mason “for all his work on the City’s trails and on its bikeway program. His leadership and dedication made that possible.” Referring to Mason’s vision for the City, Ross added, “This trail will be a good way to recognize his contributions to the City, over many years.”

Noting that she was on the PRAB board when Mason was its chairman, Councilmember Janice Miller said, “This is an appropriate move forward.”

Councilmember Joe Harmon said he, too, “totally supported” this action, and then all the members approved it unanimously. As a result, signage at the future entrances to this trail will be erected indicating that it will someday be the site of the John Mason Trail.

Afterward, Mason said, “What a difference a quarter century makes! When I was the mayor of the City of Fairfax in the ’90s. there was little interest in trails and non-auto travel options. Today, the City is aggressively pursuing multimodal planning.

“Key goals include creating ‘15-minute neighborhoods’ – ensuring that 100 percent of the residents can access a local activity, as well as green space, trails or open space. via a safe, 15-minute walk from home. Credit goes to thoughtful leadership and strong, civic support.”

MASON said, “I look forward to the day when the Gateway Regional Park, at the intersection of Pickett and Old Pickett roads – a NOVA park in collaboration with the City – will be an acknowledged, nodal point for trails in Northern Virginia, connecting east to the Fairfax County Cross-County trail, north to the Vienna-Fairfax-GMU Metro Station and onward to the W&OD Trail, and south to GMU and onward to the Workhouse Arts Center and Occoquan Regional Park, about 14 miles away.”

As for the Comstock Trail now being named after him, Mason said, “I appreciate the honor. More importantly, if it helps to generate momentum for a strong trails program, I’m even more appreciative.”