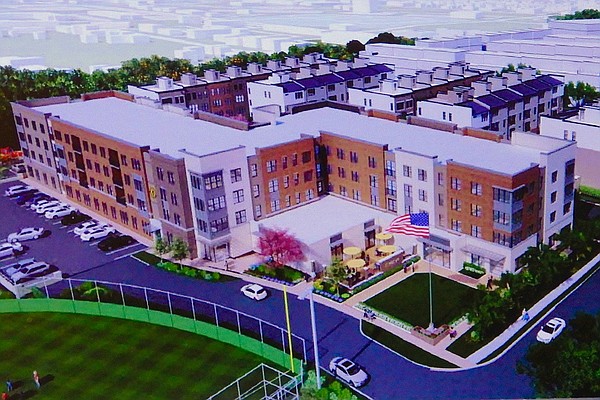 American Legion Post 177 has big plans for a major redevelopment of its facility at 3939 Oak St. in Fairfax City. Besides renovating its own building, it wants to construct both workforce and market-rate homes and provide much-needed amenities to nearby Chilcott Field.

But during a recent Fairfax City Council work session, the applicants learned of several problems the City has with its proposal. They include concerns about parking, traffic, tree preservation and the location of affordable housing.

The project is a collaboration between the American Legion, Toll Brothers and Post 177 Apartments LLC (Good Works) – which will develop the affordable/workforce housing. The American Legion’s building is decades old and too outdated to be sustainable for the future. For example, there’s no handicap access between the floors, making it difficult for disabled veterans to easily move around the facility.

So the proposal calls for completely renovating and enlarging the existing 12,000-square-foot building to 17,140 square feet and adding three floors of brick-exterior, affordable apartments above and to the back of the current structure. Also planned are market-rate, two-over-two townhouses, a park and 34.5 percent open space.

AND CHILCOT FIELD – where both the Fairfax Little League and Challenger Baseball teams play – would receive a $1 million overhaul and modernization. It currently has no amenities; but under the proposals, it would get a new stadium, bleachers with an elevator, concession stands, restrooms and a press box.

During the work session, City Planner Supriya Chewle explained the plans to the Council. She said there’d be 76 affordable apartments (ADUs) and 66 stacked townhouses, and that the developer wants a zoning change from Residential High to Planned Development Mixed Use.

“Chilcott’s baseball field would have a new, two-story, press box behind home plate, covered bleachers on the second level and a covered dugout on the first-base line, parallel to Oak Street,” said Chewle. “A portion of the [proposed] tot lot is in the flood plain, so it would need a special permit.”

She said a 5-foot-wide sidewalk network would go within the project and along Oak Street. The density would be 18.3 dwelling units/acre, which is less than they could have there. “ADUs require 1.5 spaces/unit, and the applicant requests a modification for 1 space/unit,” said Chewle. “So the applicant is short 63 multifamily parking spaces. [City] staff is concerned that the parking supply for the ADUs may be insufficient. And the Planning Commission recommended a parking location for the two-over-twos, as well.”

Furthermore, she said, “The applicant proposes having all the ADUs in the multifamily building [to be part of the American Legion building]. But the ADUs shouldn’t all be concentrated in one building, so the applicant would need a modification.”

And although the developer plans to remove 16 trees, the Planning Commission called tree preservation there “crucial.” It also wants the tot lot to remain part of the proposal, requested a Transportation Demand Management Plan and told the applicant to discuss its plans with nearby residents and civic associations.

Chewle also noted that “A lack of internal, traffic circulation within the site could put more traffic onto Oak Street. The development is projected to yield 35 students, and staff estimates the project would have a negative, fiscal impact on the City.

Councilmember Sang Yi said, “Regarding the ADUs, we don’t want segregated housing. They should be interspersed throughout the project. This flies in the face of the ADU policy we created.”

“All the ADUs are rental units,” replied Chewle. “So if there were four ADUs in the two-over-twos, they could be for-sale units.”

Yi also stressed that, “Buried in the applicant’s project summary it says that, ultimately, the American Legion would take ownership of the ADUs and have them as an income source. Does that mean these ADUs could someday be turned into market-rate units?”

Brooke Hardin, the City’s director of Community Development and Planning, explained that, “To be accepted into the City’s program, ADUs would have a 30-year rental program.”

And Fairfax Mayor David Meyer said, “A lot of information hasn’t yet been provided to staff, so there’s a lot of unanswered questions.” Post 177’s Hank Waters then reminded everyone that the American Legion is “a major institution in the City and only wants to help the City.”

Attorney Ken Wire, representing the applicants, called it “one, cohesive, master-development plan. We’ll save as many Oak Street trees as possible, and we’ll comply with the 30-year ADU agreement, after which those units would revert to the American Legion.”

He said the 76 ADUs would be available in a range from 30-80 percent AMI (Area Median Income). “The overall average is at or less than 60 percent,” said Wire. “It goes to 80 percent so if, for example, a firefighter gets a raise, he won’t get kicked out of his home. ADU rents will range from $582 to $2,300/month, and we’ll administer these units.”

AS FOR THE TOT LOT, he said, “If things in the RPA [Resource Protection Area] are a problem, we’ll change and reconfigure that area. And we can move the tot lot elsewhere. We’re actually moving the existing batting cage out of the RPA.”

Furthermore, stressed Wire, “We don’t want the minutiae to get in the way of the overall good. This total project will be less than 17 percent of the traffic on Oak Street, and most ballfield usage will be after hours and on the weekends. I’ve never seen an ADU project with underground parking like this one has, and we’ll see if we can do better on our ADU parking.”

He also told the Council that “the financial impact isn’t just dollars and cents.” He then listed the project’s benefits to the community, including: Preserving and modernizing the building housing the American Legion – which helps various Scout groups, nonprofits and baseball teams; adding affordable housing and increasing the City’s housing diversity; and improving Chilcott Field.

Meyer then advised him to “Address the Planning Commission’s concerns and work with staff to provide them the information they need so we can work through these issues. We value and greatly respect the American Legion’s presence in our City, and we want to work collaboratively with the Legion so it can continue to do all it does, in the future. We want to make sure this is the best project for the optimal number of people in the City.”