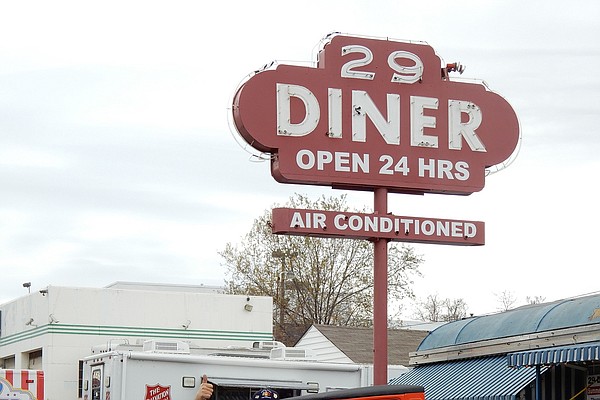 Since John K. Wood revamped and reopened the historic 29 Diner in Fairfax City in September 2014, he’s taken care of others – at-risk youth, veterans, the homeless and families in need. And when the pandemic hit, he turned the restaurant into a community kitchen to provide free meals to health-care workers, firefighters, out-of-work teachers and children no longer receiving food at school. 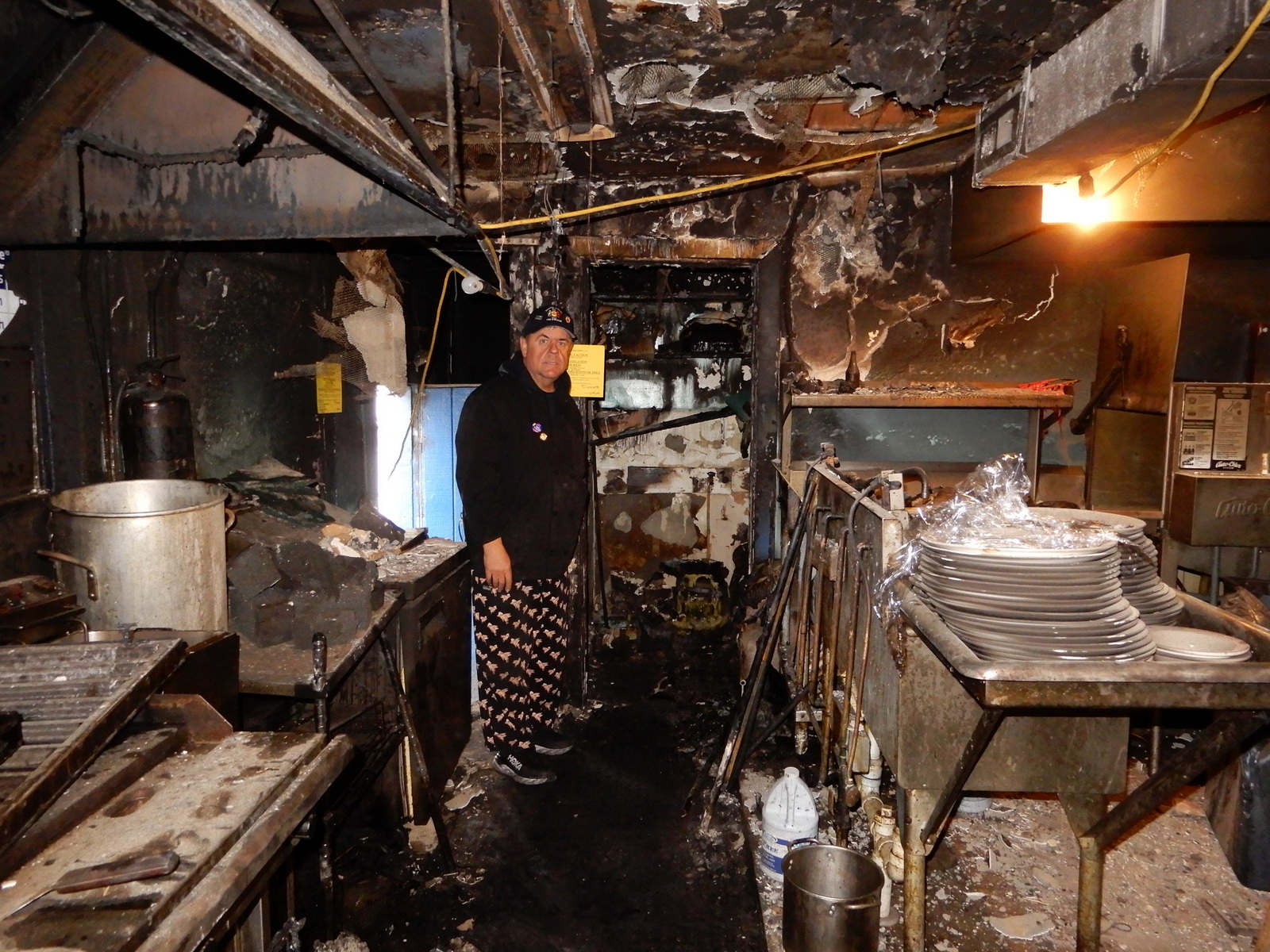 Owner John K. Wood inside the diner’s destroyed kitchen. The fire started in the supply closet next to and behind him.

Now, though, after a devastating fire there – just two days before Thanksgiving – he finds himself needing help. On Nov. 23, while catering in Manassas for an Air Force veteran, Wood got a call from Andy Vita, the City fire department’s assistant chief of operations, asking him, “Do you know your diner’s on fire?”

Rushing back to Fairfax, he was overcome with emotion. “I was feeling desperate,” said Wood. “Everything my family and I worked for all these years was lost. I felt despair, depression and anxiety – and I relive it every day. I felt like I let the community down, and I kept thinking, ‘How do I fix the diner and pay the employees?’”

The diner was closed at the time, so no one was injured. “We’re closed on Tuesdays,” said Wood. “But that day, we opened half the day to cook all the food we planned to deliver for Thanksgiving to 178 families in need, and for the catering event. All the employees left at 3 p.m., and the fire broke out at 6 p.m.”

He said it began in the storage closet in the kitchen and quickly spread. “It started charring the shelves and caused the degreasing and grill-stripping chemicals on them to fall,” he explained. “And when they fell into the flames, they exploded and scorched, ripped the ceiling and burned the plaster. The fire melted all the electrical wires, lines, outlets and plugs. The temperature reached as high as 700 degrees.”

“It wasn’t a grease or electrical fire, or an equipment failure,” continued Wood. “It was a chemical fire, but the cause is still under investigation. The heat melted everything in the dish area, and the burning chemicals scorched the walls. The fire was so intense, it burned the microwave, grill and everything else in the kitchen – which is a total loss. And the dining area is all covered in soot, smoke and tar.”

Although fire investigators’ preliminary damage estimate is around $45,000, he believes it will cost him more than $500,000 to repair – and his insurance won’t be enough to cover it all. 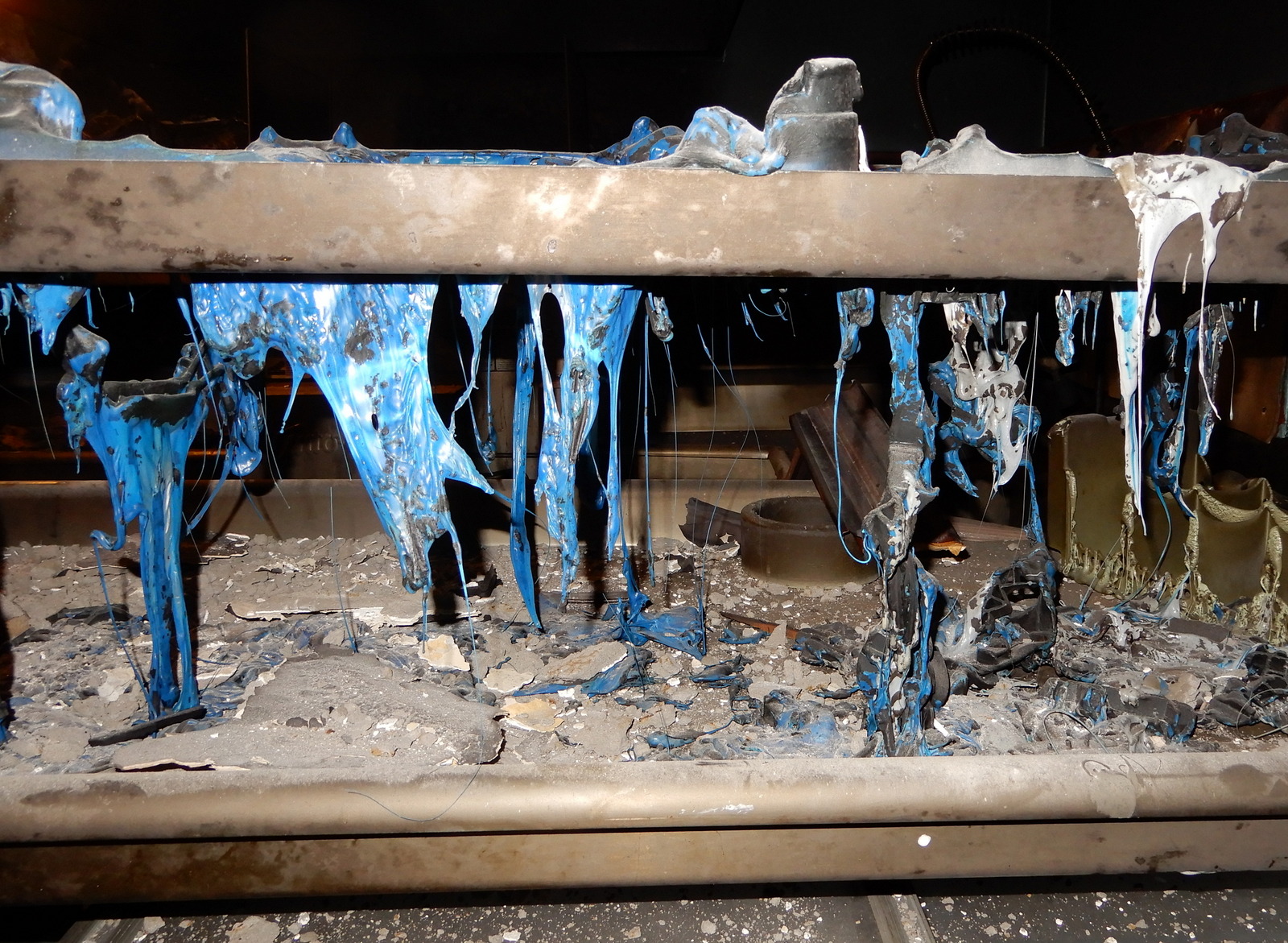 “We have limited insurance because it’s a 75-year-old building, so it was difficult for us to get blanket coverage,” said Wood. “It only covers the building, equipment and personal property. It doesn’t cover our rent, income loss or benefits for the employees. So we don’t have any income coming in – but the bills still have to be paid, and the cost of repairs exceeds our insurance amount.”

And that’s where the community’s generosity comes in. The night of the fire, a teacher immediately started a GoFundMe account for the restaurant, and it raised more than $50,000, the first week. As of Dec. 7, nearly 1,000 contributions have yielded almost $60,000 of the $100,000 goal. To donate, go to https://www.gofundme.com/f/help-rebuild-the-29-diner-kitchen.

Some typical comments people left on the donation site are as follows:

Klara Alex: “Thank you for everything you did during the most difficult time of the pandemic. The community appreciates and needs you.”

Charles Cather: “I remember the diner well from many visits. Even though we’re in AZ now, we will not abandon these good people.”

Melissa Hoadley: “My dad LOVED 29 Diner; he hung out there with his buddies for years. We need to keep 29 Diner alive.”

Will Mac: “I’ve been enjoying their fare for decades with the wife and kids, discussing dreams, our futures and the school day. John Wood, you’ve set the bar for humanity and changing the world, one meal at a time.”

A second account was also begun last week for the diner’s 10 employees. Its goal is to replace some of their lost wages. To help, go to https://www.gofundme.com/f/29dinerlovestheiremployeesfundraiser.

Despite the fire, Wood hasn’t missed a beat, taking catering jobs in exchange for donations to the rebuilding fund, as well as feeding families in need for free. “I lease additional cooking space from another kitchen, and my food trucks are still operational,” he said. “And we’re also cooking in the Salvation Army food truck in our parking lot.”

He even came through at Thanksgiving, delivering cooked turkey, spiral-cut hams, barbecue and all the traditional side dishes to people who otherwise would have gone hungry. And in stark contrast to the black, destroyed kitchen inside the diner, cheery Christmas music plays outside the building and a toy drive is in full swing there.

“We’re still doing our Season of Giving [providing a Christmas celebration to 100 families living in eight shelters], free food pantry and free toys to the youth of the community,” said Wood. “We’re still delivering food and gifts to Fairfax County domestic-violence shelters, wounded warriors and their families, and health-care workers and their families.”

Meanwhile, he estimates it’ll be six to eight months before the diner, itself, can reopen. “We’ll probably partition off the kitchen from the dining room and start the fire mitigation and restoration soon,” he said. “The roof and floor are intact, so the building is still usable. I have to gut and rebuild the kitchen – and all according to EPA and local, fire and food-service standards before we can serve meals in here again.”

Wood has owned 29 Diner for eight years and renovated it with $100,000 of his own money. “I’m the sole proprietor – it all falls on my shoulders,” he said. “I’m here fighting every day to keep this place open, and the only beacon of hope and light is the community helping us.”

He said Fairfax County teachers set up the GoFundMe accounts “because we’ve cared for the community, and they love what we do to help youth and first responders. The Fairfax Harley Owners Group wants to do a fundraising ride, and [county] Sheriff Stacey Kincaid has offered to help, as have the police, firefighters, veterans and all the people we’ve helped.”

Indeed, as Wood was saying those words last Friday outside his diner, a total stranger drove up and handed him $60. The man wanted to remain anonymous but told The Connection he contributed because, “These guys have done an amazing job taking care of others. These are really good people, and we want them to be able to continue to help the community and make more good meals.”

Wood said he’d received similar donations that day from area residents and, by afternoon, they already totaled $1,000 – which he planned to divide among his employees. There’s also a locked box outside the diner where people may contribute.

The 29 Diner is also known for Wood’s signature, “Feed a Vet, Save a Vet” program whereby his customers leave donations in jars inside the restaurant. He then uses this money to give veterans free meals while they listen to the American Foundation for Suicide Prevention talk about preventing military suicides.

“In the past two years, we’ve served 120,000 free meals to veterans through this program,” he said. “But the tables turned, the night of the fire, and now they and others are rallying around us in our most dire time of need.”

Because of people’s generosity, said Wood, “It’s obvious how much they love and support us. It’s a testament to how we touched their hearts and souls – and that they’re family to us – and I’m speechless in my appreciation of them. Now, we’re on their wings and they’re lifting us up – and we won’t let them down.”