‘These Investments Will Pay Off in the Future’ in Fairfax City 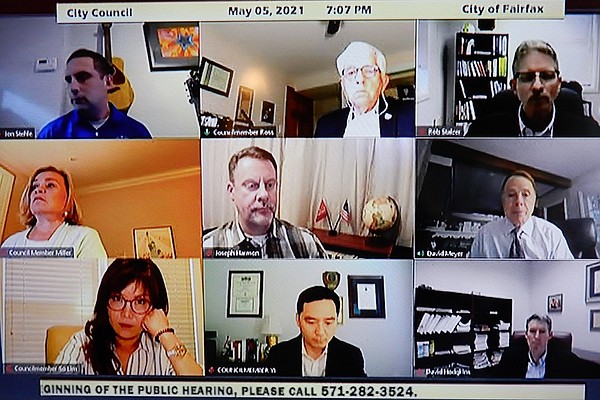 Fairfax City last week adopted its FY 22 budget. It did so without raising residents’ real-estate tax rates by $0.005, as was previously proposed. But because home assessments increased, residents will receive higher tax bills, anyway.

The real-estate tax rate will remain $1.075 per $100 of assessed value, with 3 cents of it dedicated to the City’s Stormwater Fund. Yet due to a 3.7-percent average increase in 2021 residential assessments, average homeowners will see an annual, real-estate tax hike of $210.

However, since commercial-property assessments dropped, real-estate tax bills for these owners will decrease by 5.3 percent. City Council approved the new budget, as well as Fairfax’s FY 2022-26 Capital Improvement Program (CIP) of $263,773,219, during a special meeting, last Wednesday, May 5.

The total approved budget for all City funds (General, Wastewater, Stormwater, Transit, Old Town Service District, Cable Fund, Transportation and Capital Funds) is $183.7 million. This amount – including nearly $155 million for the General Fund – is aimed at returning the City to its pre-pandemic status, while helping provide for its future.

AT THE MEETING, City Manager Rob Stalzer and Chief Financial Officer Dave Hodgkins discussed the individual tax rates and overall budget with the Council members before they voted on each measure. First was the C&I (Commercial and Industrial) tax rate of $0.125 per $100 of assessed valuation.

“It would generate $2.3 million and enable us to compete favorably for transportation dollars,” said Stalzer.

“We need to maintain this tax at the maximum rate of 12.5 percent,” added Hodgkins. “[If not], we’d have to find another funding source in order to allow us to receive the full, 30-percent amount of NVTA [Northern Virginia Transportation Authority] funding.”

Agreeing, Mayor David Meyer said, “We use this money for the up-front planning [of our transportation projects]. It enables us to have cost estimates that are fairly accurate.” The Council then approved this tax rate unanimously.

It also unanimously endorsed increasing the City’s wastewater-service rates by 6 percent. “It’s so we can eventually fully fund the utility,” said Hodgkins. The higher user fees are expected to increase Wastewater Utility revenues by $424,000. The quarterly financial impact to the average residential customer will be $7.16, and an estimated $15.60 to commercial customers.

Fairfax raised these rates 10 percent, from FY2014 through FY2020, and 8 percent in FY2021. “Increased residential and commercial wastewater user rates are required to fund the City’s increasing costs associated with its aging infrastructure within the City,” explained Hodgkins. “They’re also needed to cover the City’s share of expenditures associated with the operation of and capital improvements to the Noman Cole Wastewater Treatment Plant.

“We estimate that we’ll need a 6-percent increase per year to keep us where we need to be and maintain our wastewater facility into the future,” he continued. “We hope it’ll decrease somewhat, in the next few years, but that remains to be seen. And it’s beneficial to our economic growth in the City.”

“I support this,” said Councilmember Sang Yi. “But these things add up for our residential, as well as business, customers – and I want us to be cognizant of it.”

Next came a combined vote for the overall FY 22 budget, plus the financial appropriations required for it and all of its sub-budgets, the FY 22-26 CIP and all the tax rates. The vote also included approval of a 3.5-percent merit increase and 2.3-percent market-rate adjustment to City employee pay scales, effective Jan. 1, 2022,

In addition, this budget restored $2.4 million in funding for City initiatives deferred due to the pandemic. And it subsidized the estimated $2.1 million increase expected in the City’s school tuition contract with Fairfax County. The vote for the budget and all its components passed, but not unanimously, with Yi being the lone dissenter.

“Each budget year, I introduce a motion for a lower, real-estate tax rate,” said Yi. “But since I know there won’t be support for it from the Council, I won’t. But I won’t support this tax rate because our homeowners’ assessments have gone up an average of nearly 4 percent – and some, as much as 10 percent.

“And it doesn’t mean people have the [extra] cash flow – and that’s because of the pandemic, with [in some cases] one or two spouses [per home] losing their jobs. And there’s an additional $21 million-$28 million coming from the federal government. Fairfax County cut its tax rate, and we should have, too.” Also concerned about the merit-based pay increases, Yi noted that, “Only one-third of our employees have received written evaluations, in the past year.”

But, replied Councilmember Janice Miller, “More than 50 percent of our budget is for contracts with Fairfax County. And we don’t know the school contract [amount] until September – which is after we adopt the budget. And we have no idea of the amount of federal money we’ll receive, or how we’ll have to spend it.”

So, she continued, “I think we should have another fiscal calendar so we could be more precise on how we make decisions. But I’ll support this budget because of the financial uncertainties surrounding it.”

COUNCILMEMBER Joe Harmon said, “Every single one of our surrounding jurisdictions has a higher tax rate than we do. And I believe we receive a higher level of service from our City staff than they do. So I’ll be supporting this budget.”

“We spent a lot of time working with staff and going over this budget,” added Councilmember Tom Ross. “And while there could be places [for] adjustments, I’d worry we’d be shortchanging the City. It’s like owning a house – you constantly need to keep investing in it. And these investments will pay off for us in the future to leave a better City for future generations.”

Meyer explained that any local government has 12-14 categories of services it must provide. “It determines which ones it can do best, by itself, and which are best done in collaboration with the county to be most effective and economical,” he said.

“We have a superior, hybrid approach to our services – at least 55 percent of which are provided by the county. Our residents appreciate the services they receive and the responsiveness of our staff. And all these things improve our quality of life and make this an enviable place to be.”