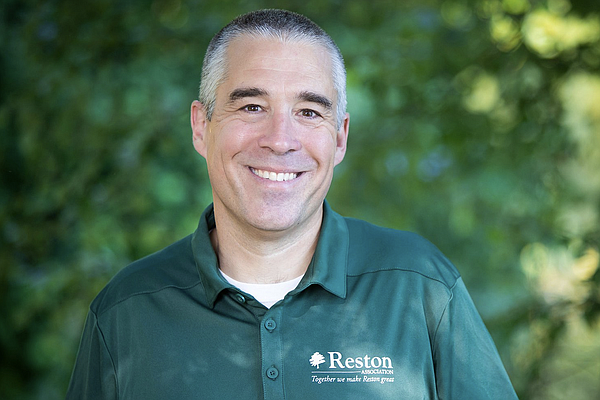 On Thursday, July 28, the Reston Association board of directors voted unanimously to confirm Mac Cummins, AICP* as the next chief executive officer of the non-profit organization. Cummins will begin his tenure on Aug. 22. He will manage RA on a day-to-day basis, supported by a staff of about 96 full-time employees, and accountable for a $19.8 million budget. Cummins sat for a Q&A with the Connection Newspapers on Friday, July 29. RA Board President Sarah Selvaraj-D'Souza and RA Acting CEO Larry Butler also attended. The interview is lightly edited for clarity and length.

Q1: What is the biggest strength of Reston that is powerful enough for you to relocate here from the west coast?
Cummins: There are two components: professional and personal. I have been a professional city planner and have done economic development, so I have tracked Reston and studied Reston in school. Reston was very much talked about as a model for how to use land responsibly, build around open spaces and trails, and what that quality of life would look like. When the opportunity popped up, I called and said, "I could really be interested in this." When I spent time with the board, talked about the future of Reston, and came on-site, I got excited about being part of the community. I'm looking at this as a little bit of a new adventure, and the reason it's worth it is that we're going to get a chance to be residents in Reston and live and breathe all the things that will be going on here.

Q2: Discuss the skills you will bring with you as, most recently, the Director of Community Development Department of the City of Bellevue, WA, to Reston Association that will benefit your new community.
Cummins: There are several transferable skills. Both positions are executive level, so there's a strategic management component. When I consider the future of Reston and some of the issues raised in surveys about potential capital improvements or building on past success, I'd probably start there. The community wants to be very active in numerous matters. Planning and development and affordable housing are among them. I had been managing these for governmental entities for several years. I will assist the community and the board as they seek to advocate with Fairfax County on some of these issues. Overall, the organization has been very well managed. It is financially sound. I will discuss with the community what they want going forward and figure out how to make it happen.

Q3: Reston Association's annual assessment rate is currently set at $740 and is a significant revenue stream ($15,804,477) for its annual budget, now at $19.8 million. What are your thoughts on that — restriction, challenge, or opportunity?
Cummins: I'm a super positive person who sees everything as an opportunity. In many ways, I believe the value generated by that $740/year assessment is phenomenal when you consider the sheer number of facilities, swimming pools, and open spaces and think about a partnership with the foundation and the Nature Center. A big chunk of my background has been in public-private joint ventures and economic development. Thinking about alternative revenue streams is something I talked about with the board. There are a lot of opportunities to do those things. I've been involved in several different things, including corporate donation programs. Many big tech employers out here want to invest in the community. For example, trail improvements or bicycle and pedestrian infrastructure help their employees, and they have foundational corporate arms to assist.

Q4: If your first year is wildly successful, what would it look like?
Cummins: I'm hoping my first year is wildly successful. When coming into a new organization, the chief executive officer must listen to and understand the current issues. A budget must be adopted by the end of the year, and the strategic plan for 2022 creates a time crunch. The budget and the strategic plan set a course. They create a north star for the community to know where we are headed. It makes it much easier when you reach a friction point and need to explain, "Here's where we are going and why we are headed there."
But, if I was going to define wild success, I'm very big on organizational development. There is an internal component to culture and morale and making the RA the best place in the world to work. I intend to spend a lot of time with the leadership team to ensure I understand and set the course to the greatest extent possible.

Q5: At the most recent Board of Directors meeting, one director said the most important issue regarding Parks and Recreation was that the facilities are aging. "We need to provide a way to fund the renovation of those facilities," the director said. What are your thoughts on the most critical issue?
Cummins: I would say there are several facilities improvements throughout the community that people want and need as they change their preferences. There's a lot more focus on active lifestyles, pedestrian and bicycle facility improvements, and safety. When I was house hunting in Reston, I started asking random people their thoughts, trying not to be a crazy person at a restaurant. "Hey, you live here. What are the sorts of things that people want at facilities?"
So, I'm thinking about the future of those facilities. Putting it globally, there's always a financial strategy question about the highest priorities. They're the best bang for the buck, which may lead to a different conclusion about what to do, in which order in terms of prioritization. Those are the things I’ll spend time on with my finance director and the board. Especially to the extent that there are limited revenue streams, which is true and is always the case in government.

Q6: What keeps you motivated and going when there are challenges?
Cummins: The most exciting thing for me is asking people what they want for their community and then figuring out the strategy to make it happen. I particularly like complex systemic things where multiple systems overlap, meaning there's no simple answer because there's an intellectual curiosity and testing. When there's a financial or service delivery component, maybe there's an inter-governmental component, and all those things can also be super challenging.

Q7: How will you continue enhancing RA's positive, uplifting culture?
A7: I think it's incumbent just to set the tone, the culture. We're here to listen; in listening, that doesn't mean necessarily, you'll get everything you want. But it means you're being heard. I am big on trying to get everybody as much of the loaf as possible, but it's almost impossible for any one group to get the entire loaf by themselves.

Reston Compared to City of Bellevue
RA is one of the largest community associations in the United States, serving a community of about 61,000 people with a budget of $19.8 million (2022).
Mac Cummins has over 20 years of municipal government experience, most recently as the Director of the Community Development Department for the City of Bellevue, Washington, population 157,000 (2022), where he managed a $79 million operating and capital budget.