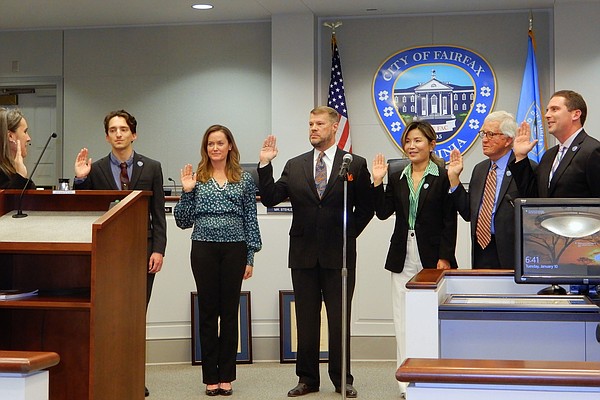 Fairfax City’s new mayor and City Council members were officially sworn in before the end of the year, so they could legally take office on Jan. 1. But before the Council meeting last Tuesday, Jan. 10, there was a ceremonial swearing-in ceremony for them before family and friends in City Hall.

Rick Herrington, with the City’s Electoral Board, read and presented each new official with framed Certificates of Election proclaiming that the results of their election were officially certified on Nov. 14, 2022.

“This is a historic night, being sworn in as your 13th mayor,” said Read, who’s also Fairfax’s first woman to hold this position. “And I’m the only City mayor to not wear a tie while being sworn in. However, I did wear pearls.”

“It’s an honor to be your mayor and a privilege to serve with all of these people on the Council,” she continued. “It’s an awesome responsibility and one of the greatest roles I could ever have in my lifetime.”

Dignitaries attending the ceremony included Commonwealth’s Attorney Steve Descano and Town of Vienna Mayor Linda Colbert. A brief reception followed, and then the new slate of officers took their places in Council Chambers beneath the new City seal and got to work.